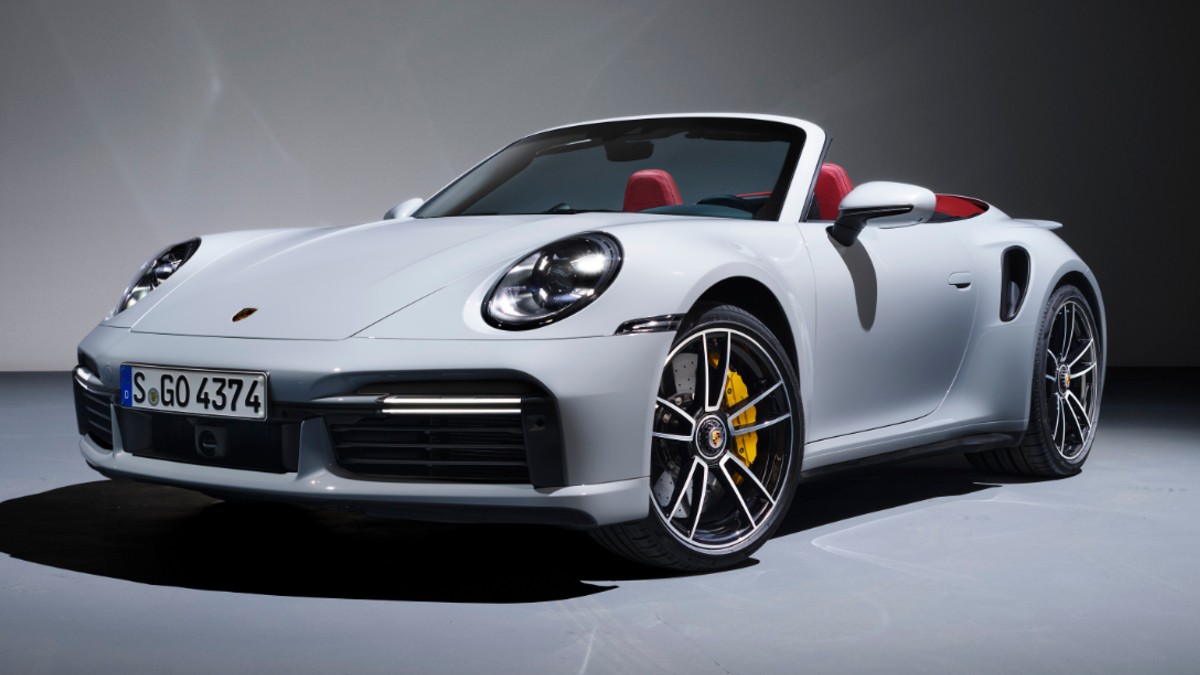 The new Porsche 911 Turbo S, a relentless performance for over four decades.

The Porsche 911 Turbo has been synonymous with a top-level performance for over 40 years, widely regarded as the benchmark for an ultimate production sports car. Everyday usability and rarity combined with cutting edge technology give every generation 911 Turbo a special charm. The place of the 911 Turbo as a highlight of many bedrooms and garage wall posters has seen the car become a hero to enthusiasts and owners through the years – a true living legend. The new generation Coupé and Cabriolet models offer 650 PS (478 kW) for unprecedented power delivery, heightened dynamic responses and greater comfort. A new flat-six, 3.8-liter engine with twin turbochargers outputs 70 PS (51 kW) more than in the previous model. The maximum torque of 800 Nm (an increase of 50 Nm) makes the new 911 Turbo S ruthless competitor. The eight-speed Porsche Doppelkupplung (PDK) double-clutch automatic transmission has been upgraded to transfer the higher torque forces of the Turbo. Overall, the yardstick sprint from 0-62 mph (100 kph) now takes just 2.7 seconds (a reduction of 0.2 seconds), while the top speed is unchanged at 205 mph.

In the tradition of the powerful 911 Turbo models and in line with the enhanced driving dynamics, the overall body width is 1,900 mm across the rear axle (an increase of 20 mm). This, specialized tires and improved aerodynamics provide more agility and grip. The adaptive aerodynamics include controlled cooling air flaps in the nose, while the larger rear wing generates higher levels of downward aerodynamic pressure at speed. Combined, the redesigned, pneumatically-extendable front spoiler and the larger surface area of the rear wing deliver 15 percent more downforce than the predecessor.

Supporting the heightened dynamic repertoire, the track is now 42 mm wider at the front axle and 10 mm wider at the rear axle. Furthermore, for the first time, the 911 Turbo S transfers its power to the road with mixed tyres in two different sizes front:rear: it rolls on 20-inch tyres with unique 255/35 dimensions at the front and 21-inch 315/30 tyres at the rear. The alloy wheels are a new design and feature distinctive centre-lock nuts. The completely new six-cylinder engine of the 911 Turbo S is based on the latest 911 Carrera engine generation and boasts the largest leap in performance ever achieved in the history of the 911 Turbo. Helping deliver this is a completely redesigned charge-air cooling system (radiators which water-cool the air after it has been passed through the turbochargers, before entering the engine), which features a larger charge-air cooler to improve efficiency.

The engine is aspirated overall by a new intake system, which has increased the flow rate of cooling air. The previous routing of engine intake air and charge-air cooling was swapped around: part of the induction air now flows through the characteristic Turbo inlets in the rear side sections. In front of the air filters, now situated in the rear wings, two other airflows have also been incorporated through the grille of the rear engine cover. This means the new 911 Turbo S has four intakes with a larger overall cross-section and lower air resistance, further aiding engine efficiency.

New, larger turbochargers again deploy VTG (variable turbine geometry) to adjust the intake boost according to engine speed and load. Where the turbochargers do differ from those fitted to the prior generation 911 Turbo is that they are now mounted in a symmetrical layout, featuring a compressor and turbine wheels now rotating in opposite directions. The diameter of the turbine wheels has been increased by five millimeters to 55 mm, while the 61 mm compressor wheel is now three millimeters larger. The wastegate flaps are electrically controlled with stepper motors for faster responses and increase power. Together with highly accurate and rapid piezo fuel injectors delivering a very controlled combustion process, this leads to significant improvements in the engine’s responsiveness and revving ability, as well as power, torque, and emissions overall. One demonstration of the engine’s higher state of tune is the temporary over-boost function being no longer required; the maximum torque of 800 Nm is permanently available in the rev range between 2,500 – 4,500 rpm.

The 911 Turbo clearly balances the demands of everyday use – yet, typically Porsche is also no stranger to the race track. The leap in performance of this new generation model is particularly noticeable in the sprint from zero to 120 mph: at 8.9 seconds, the new 911 Turbo S is one full second quicker than its predecessor. Thanks to the enhanced Porsche Traction Management (PTM) all-wheel drive, the transfer case can distribute significantly more torque, with up to 500 Nm of drive force capable of being sent to the front wheels. Porsche Ceramic Composite Brakes (PCCB) are fitted as standard for effortless deceleration, and larger discs with new ten-piston fixed calipers on the front axle boost the retardation in line with the new levels of motive power.

The latest generation of the PASM chassis is also more dynamic in its set-up. Faster and more precisely controlled dampers provide significant advantages to the driving dynamics with respect to body roll stability (aided by the standard Porsche Dynamic Chassis Control – PDCC – and the rear axle steering), suspension control, steering behavior and tire grip. In the 911 Turbo tradition, the harmonious exterior design balances its proportions so form clearly follows function. At first glance, the eye is drawn to the muscular rear wheel arch sections with integrated air intakes, which emphasize the sleek body of the 911 Turbo S. The new look of the tail is completed by rectangular tailpipes in high-gloss Black, again typical of the Turbo model. The new nose with wider air intakes has a characteristic Turbo-look with dual front light modules, as well as standard LED matrix headlights with dark inserts.

Behind the wheel, the interior has an appropriately high-quality, sporting finish that honors the 911 Turbo lineage. For instance, the 18-way adjustable sports seats feature stitching that pays homage to the first 911 Turbo (type 930). The standard equipment list includes a full leather interior and carbon trim in combination with Light Silver accents. High-quality graphic elements and logos in the instrument cluster provide further subtle hints of the characteristic Turbo S power that is available. The center screen of the Porsche Communication Management (PCM) system measures 10.9 inches and controls the audio, satellite navigation, car set-up controls plus a variety of on-line digital functions. The GT sports steering wheel, the Sport Chrono package with a newly integrated Porsche Track Precision app and BOSE® Surround Sound system bring further focus to the cockpit.

New equipment options further underline the clear purpose of this all-wheel-drive 911. These include a sports chassis that has been lowered by 10 mm (complementing the existing Porsche Active Suspension Management (PASM) fitted as standard) and a sports exhaust system available for the first time.