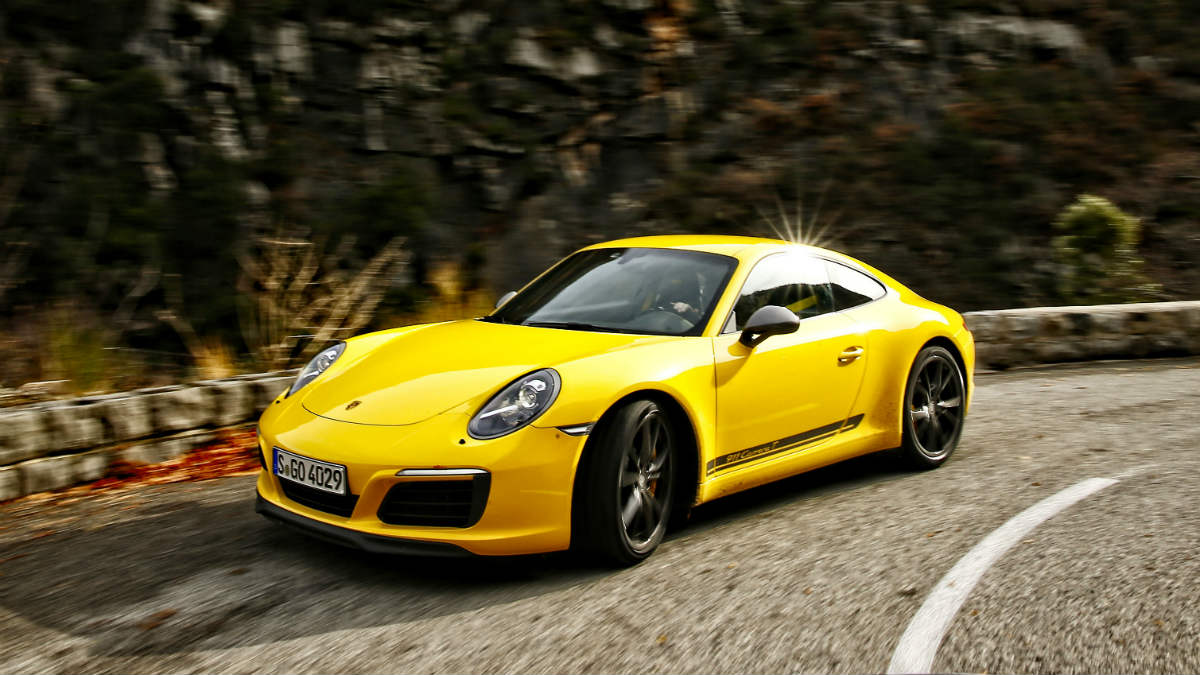 The Porsche 911 is the benchmark for driving dynamics among sports cars, renowned for its spread between everyday comfort and track driving performance. With the new 911 Carrera T, the intrinsic values of the iconic coupe are further enhanced by reducing weight and increasing performanceThe new model is based on the 911 Carrera, and the name evokes the concept behind the classic 911 T of 1968. The rear-mounted, flat-six twin-turbocharged engine delivers 370 hp (272 kW) and powers the rear wheels via a shorter final drive ratio, seven-speed manual gearbox, and mechanical rear limited-slip differential.

Every aspect of the 911 Carrera T is designed to deliver lightweight construction and at the same time optimize driving enjoyment. For example, the rear and rear side windows are lightweight glass and the door trims feature opening pull loops. The sound absorption has been largely reduced, the rear seats omitted and the Porsche Communication Management (PCM) system is a no-cost option. The result: an unladen weight of 1,425 kilograms, and a 20 kg weight reduction versus a 911 Carrera with comparable equipment.

The 911 Carrera T – at Porsche, “T” stands for Touring – also boasts several other standard features not available for the 911 Carrera, including the PASM sports chassis lowered by -10 mm, the Sport Chrono Package with steering-wheel-mounted Mode switch (but without the dash-mounted clock/timer), a shortened gear shift lever with red-coloured shift pattern, and Sport-Tex fabric seat centres. The same is the case for the optional rear-axle steering, which is also not available for the 911 Carrera.

The core appeal of the rear-mounted flat-six engine in the 911 and its characteristic sporting driving experience still resonates with owners and enthusiasts alike, over 50 years since the model was first launched. In the Carrera T, the evocative 3.0-litre flat-six cylinder twin turbocharged engine generates an output of 370 hp (272 kW) and a maximum torque of 450 Nm, delivered between 1,750 rpm and 5,000 rpm. The weight-to-power ratio is 3.85 kg/hp (260 hp per tonne) further honing the quick responses and dynamic agility. Courtesy of the manual transmission with shorter final drive ratio and the mechanical limited-slip differential, the 911 Carrera T can sprint from 0 to 62 mph in 4.5 seconds – 0.1 seconds faster than the 911 Carrera Coupé. The model reaches the 124 mph (200 kph) limit in just 15.1 seconds.

The twin-clutch Porsche Doppelkupplung (PDK) automatic transmission is also available as an option, enabling the vehicle to reach 62 mph in 4.2 seconds, and 124 mph in 14.5 seconds. Both transmission variants enable a top speed of over 180 mph. The Porsche 911 has always balanced performance and efficiency, sportiness and everyday usability, and the Carrera T is true to this ethos, offering Combined fuel economy of up to 33.2 mpg, equivalent to CO2 emissions 193 g/km. The design of the 911 Carrera T highlights the emotional appeal and sporting intent of the car. The body parts and wheels function as clear differentiating elements. At the front, the 911 Carrera T features an aerodynamically optimized front spoiler lip, and the Sport Design exterior mirrors are painted in Agate Grey Metallic. The new model is easily recognizable in profile thanks to its 20-inch diameter Carrera S wheels finished in Titanium Grey. The “911 Carrera T” logos represent another distinctive feature along the side.

The rearview is characterised by the slats in the engine lid grille, the Porsche logo, and the “911 Carrera T” model designation finished in Agate Grey, plus the sports exhaust system (fitted as standard) showing its centrally positioned twin tailpipes painted in black. The exterior colour options are Black, Lava Orange, Guards Red, Racing Yellow, White and Miami Blue, as well as the metallic colours Carrara White, Jet Black and GT Silver. Inside, the passenger compartment also has a sporting and pure-bred emphasis. The driver and front passenger sit in black, four-way adjustable, electric sports seats with centre panels in Sport-Tex fabric, while the headrests feature a “911” logo stitched in black. The new Carrera T model also comes with the option to choose full bucket seats for the first time.

The driver grips a smaller diameter GT sports steering wheel with leather rim, and the mode switch provided on the steering wheel as standard allows the driver to select different driving programmes. The shortened gear shift lever with shift pattern in red remains exclusive to the 911 Carrera T. The decoration on the fascia and door trims are black, as are the door opening loops. A new addition is the ‘T interior package’, which introduces a more sporting look with the contrasting colours of Racing Yellow, Guards Red or GT Silver. These colours can be used to add visual accents on various interior components, such as the seat belts, the “911” logo on the headrests, the door opening loops or the centres of the Sport-Tex seats. Customers will also be invited to explore the potential of their new car, and further develop their own skills behind the wheel, by participating in a bespoke driving experience around the unique tracks at the Porsche Experience Centres.