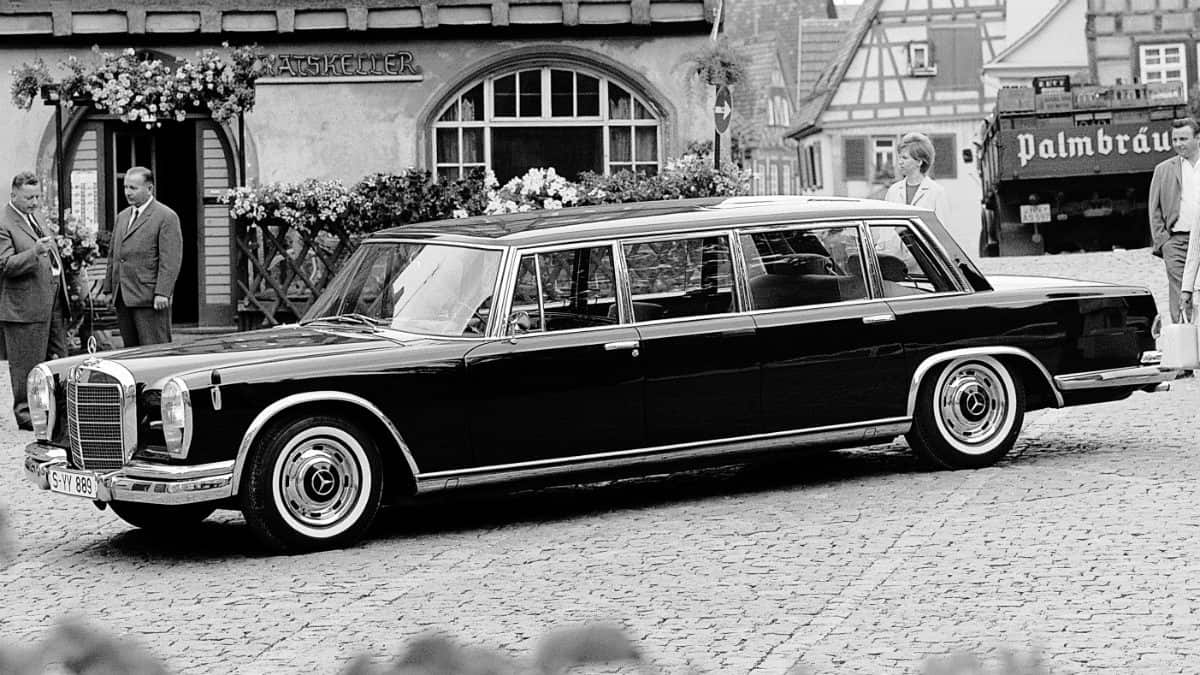 Many stars and heads of state have enjoyed “Pullman” Saloons – Luxury and representation vehicles at the highest level.

The history of “Pullman” starts with George Mortimer Pullman, an entrepreneur who developed a railroad sleeping car that contained the blankets, comfortable cushions, and space. His Pioneer sleeping car was patented in 1868, and from then on, his dream of creating a revolution in railroad travel was realized. People were choosing to pay much more to travel in his Pullman wagons, then referred to with the praise “the world’s greatest hotel”. The Pullman Palace Car Company took his luxurious design and brought spaciousness and comfort to automobile manufacturers. Pullman built the bodies for the exclusive vehicles. The Pullman coach came to stand for the highest quality of luxury. Pullman vehicle bodies were designed with a much longer wheelbase than other cars. This allowed Mercedes-Benz to develop vehicles with two, and more, rows of seats and four to six windows and doors. This allowed for space for a chauffeur to drive the wealthy owners, and this has remained standard until the present day.

Leather cap, a canister of petrol and a scented tree ornament are only three of “33 Extras” on display at the permanent exhibition at the Mercedes-Benz Museum. Fascinating details in the history of mobility that bring automotive culture to life. One of these stories explains the term “Pullman”. Comfortable travel at the highest level has played an important role in the history of Mercedes-Benz, the oldest luxury car brand in the world, since very early on. For example, for Emil Jellinek, the pioneer of the Mercedes brand: he had his 1904 Mercedes-Simplex 60 PS, the top model by Daimler at the time, refurbished as a luxurious touring saloon in 1907. Today the vehicle can be experienced in the room “Legend 2: Mercedes – Birth of the Brand, 1900 to 1914” at the Mercedes-Benz Museum. It is deserving of the name “Pullman”.

In more recent times the Pullman tradition has belonged to the 140 model series of the Mercedes-Benz S-Class. The refined vehicles are largely made by hand. This began in 1996 with the S 600 Pullman Saloon with a 290 kW (394 hp) twelve-cylinder engine. “Pullman” is not just for celebrities. For example, the first diesel passenger vehicle built as standard in the world, the Mercedes-Benz 260 D (W 138), was also available as a generously dimensioned Pullman Saloon from 1936. Such a car can be found in the room “Legend 3: Upheavals – Diesel and Compressor” at the Mercedes-Benz Museum. The high degree of spaciousness can accommodate up to six passengers – as a taxi!

“Pullman” also denotes exceptional comfort for Mercedes-Benz commercial vehicles: that is what the letter “P” in the type abbreviation of the front-steering truck with the Mercedes star LP 315 stood for in 1955. The fascinating vehicles of this era include the LP 333 “Millipede” with two steered front axles, which can be seen in the permanent exhibition at the Mercedes-Benz Museum in the room “Collection 2: Gallery of Carriers”. The success story of the Pullman versions of luxurious Mercedes-Benz passenger vehicles can be seen in the representation vehicles in the middle of the 20th century: of the Mercedes-Benz 300 (W 189) from 1960, just three remain. The Mercedes-Benz 600 (W 100), on the other hand, was available from 1963 to 1981 as a Pullman Saloon and Pullman Landaulet with four or six doors as standard. Individualization took center stage: Mercedes-Benz not only fitted the rear seats longitudinally for the Beatle John Lennon but also installed one of the best hi-fi systems for cars available at the time – for travel sound at a Pullman level.