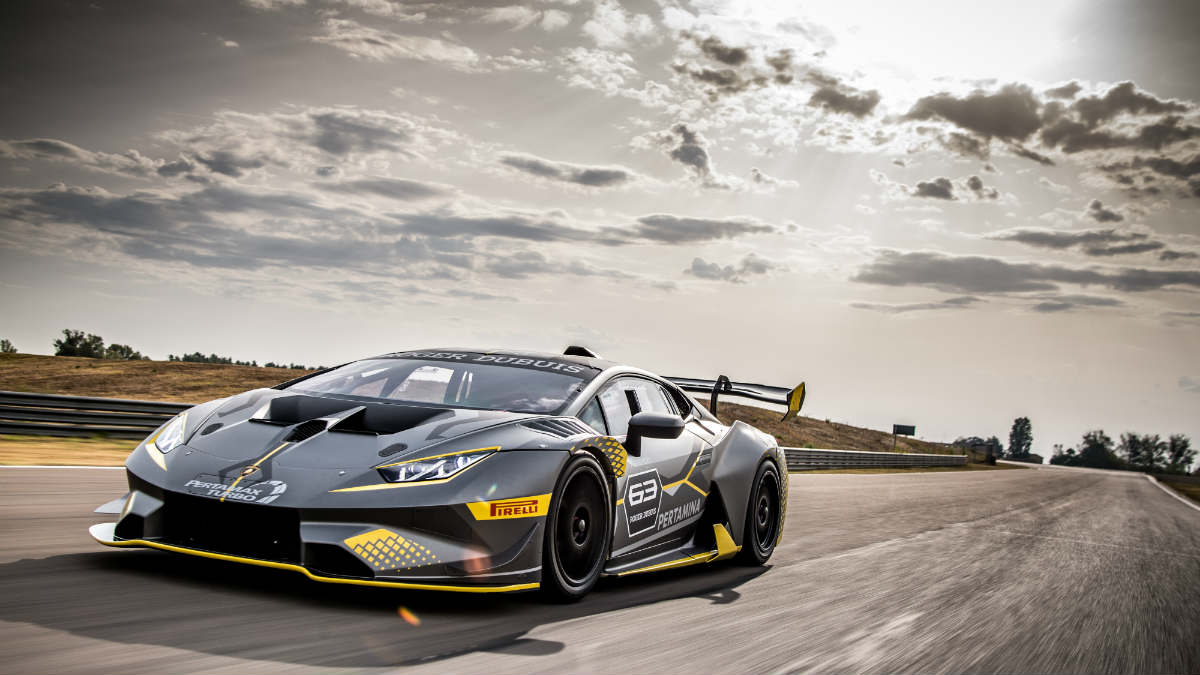 Lamborghini Squadra Corse, the motorsport department of Automobili Lamborghini, is unveiling the new Huracan Super Trofeo EVO and announces its new partnership with the famous Swiss luxury watchmaker Roger Dubuis. Following the debut of the Huracán LP 620-2 Super Trofeo three years ago, the racing car has now been extensively redeveloped. The new Huracán Super Trofeo EVO raises the already high standards of the previous model with entirely redesigned aerodynamics, new devices to improve safety, and several improvements to its mechanics and electronics. The developments combine to offer drivers and teams an efficient and highly professional race car, which makes its track debut at the three continental series in Europe, Asia, and North America from spring 2018. The car will not only participate in the one-make Lamborghini Super Trofeo series, but it may also compete in international Gran Turismo championships in the GT Cup category, and Endurance races, providing more versatility for teams and drivers. The livery of the Lamborghini Huracán Super Trofeo EVO is designed by Lamborghini Centro Stile and focuses on the car’s new shapes. The Titan Grey base color celebrates the partnership linking Lamborghini Squadra Corse and Roger Dubuis, which will begin from 2018. The two brands share the same values, such as the ongoing pursuit of excellence, the search for innovative materials, and obsessive attention to detail during the production of their precision instruments: namely Roger Dubuis watches and Lamborghini cars. “Lamborghini Squadra Corse is continuing its plan to grow and consolidate its position as a trendsetter on the competition scene. We are proud to work with a prestigious brand such as Roger Dubuis; one which shares our values of ongoing innovation and product uniqueness, while always respecting our heritage and with the purpose of thrilling and amazing our customers and all those who love the brand around the world ”said Stefano Domenicali, Chairman and Chief Executive Officer of Automobili Lamborghini. Roger Dubuis Chief Executive Officer Jean-Marc Pontroué is clearly revved up about this high-energy partnership: “Like Lamborghini, we deliver ‘engines’ distinguished by their extreme quality and cutting-edge performance. the owners of exceptional Italian super sports cars, our customers are interested in standout aesthetics that ensure instant recognition matched by exclusivity and rarity. Combining our talents to deliver exceptional timepieces with unique experiential value, we are therefore placing ourselves in a higher place.”

The first version of the Lamborghini Huracan Super Trofeo unveiled at California’s Monterey Car Week in August 2014 rewrote the rules of single-marque series. With over 150 cars sold since its debut and an average annual attendance of 90 cars competing in the four continental championships (Europe, Asia, North America, and the Middle East), the Huracán Super Trofeo quickly became one of the models setting standards in one-make series. Lamborghini Squadra Corse has developed a profound evolution of the car, it has been extensively reworked, underscoring the particular features that contribute to the model’s success: the performance and thrill of a GT3 but with considerably lower running costs. “Sophisticated aerodynamics and ultralight materials: the Huracán Super Trofeo EVO has been developed based on the two main pillars of the brand’s technology,” explains Maurizio Reggiani, Chief Technology Officer of Automobili Lamborghini.“Like the road version of the Huracán Performante, where the use of composites and the drive to achieve maximum aerodynamic efficiency are the basis of levels of uncompromised performance, the Huracán Super Trofeo EVO also focuses on these elements, continuing as a category benchmark.” The new Lamborghini Huracán Super Trofeo EVO has been developed following the same philosophy but raising the bar considerably as far as its features are concerned. This is thanks to its new body kit developed by the team of motorsport engineers at Automobili Lamborghini, working in partnership with Dallara Engineering and Lamborghini Centro Stile. Their aim was to maintain the same high downforce of the previous model while achieving higher overall aerodynamic efficiency and so less resistance to forwarding travel with improved stability.

The body kit of the new Lamborghini Huracán Super Trofeo EVO is made from carbon fiber, with all its parts completely redesigned. Only the flat floor, the front splitter, and the rear diffuser have not been altered, reflecting the intention to maintain the same downforce and avoid any increase in running costs for customer teams. “Our customers are the main reason we continue in our pursuit of excellence and ongoing improvement, Giorgio Sanna, Head of Motorsport at Automobili Lamborghini, “and this is why we kept the practical demands of the team and of the drivers in mind when we were designing the new Huracán Super Trofeo EVO. As it is a single-brand series, there are no regulatory demands that mean a successful model has to be altered. But with the EVO we wanted to give our customers an even more thrilling experience at the wheel, with superior performance and improved safety.” One of the more obvious changes in the body kit of the Lamborghini Huracan Super Trofeo EVO is the rear fin on the rear hood and the upper air intake. The side fin on the rear hood is the same solution employed by class LMP1 prototypes for the 24 Hours of Le Mans, by the single-seat Formula One racing cars, and used on a Gran Turismo race car by Lamborghini Squadra Corse for the first time, giving increased stability. Lamborghini’s official development drivers, in ongoing testing of the new Huracán Super Trofeo EVO since last spring, felt a considerable increase in rear stability when taking fast bends along with a reduction in oversteering, resulting in better driving stability and faster cornering.

The airscoop on the roof has two functions: the first is to create dynamic supercharging for the 5.2 liter, 620 hp naturally aspirated V10 engine, generating 3% more torque at maximum speed (280 km/h limited electronically). The second purpose is to create a general improvement in aspiration: lowering the temperature of the air and, as a consequence, increasing engine torque at all engine speeds, unlike its predecessor, which featured air vents on the sides. The elimination of the air intakes on the sides has also made it possible to completely redesign the rear of the vehicle, making it more aggressive but most of all more aerodynamically efficient. The upper section of the rear sides is flatter and sharper with a design that has created two channels, which considerably increase the airflow on the rear. The bottom rocker cover fin on the sides has also become larger than before in order to improve the flow of air towards the radiators and improve cooling.

At the front, the new Lamborghini Huracán Super Trofeo EVO has a totally new bumper. The lower air intakes are larger, as are the aerodynamic side spoilers (flics), with a larger surface area giving greater aerodynamic load on the front. This also generates an improvement in the overall aerodynamics with a 3% shift in balance towards the front, improving the vehicle’s stability and making it possible to enter bends faster and more precisely. The front fenders have a flatter and sharper design with new slits in their upper section with a negative , reducing resistance to forward motion. At the center of the front hood, there is a new, hexagonal air intake: its purpose is to lead air inside the vehicle’s interior and lower the ambient temperature to guarantee improved ventilation for the driver. The rear of the new Lamborghini Huracán Super Trofeo EVO also has new features, once again designed with the aim of increasing its aerodynamic efficiency and stability. The rear fenders have a flat, elongated surface towards the rear: their aerodynamic function guarantees a steady and constant disconnection of the airflow from the rear regardless of whether the car is on a bend or a straight section of road, once again resulting in more stability. The rear spoiler, located immediately underneath the large adjustable wing, has a larger and flatter surface compared to the previous model. This has made it possible to work on the aerodynamic efficiency, recovering more pressure while improving the resistance to forwarding motion. Lower down, the engine ventilation compartments are considerably bigger than before, improving ventilation of the engine, whereas the new flics improve the flow of air exiting the rear wheels. The adjustable rear wing sits on new pillars made as before of aluminum, that are larger than previously. However, their weight has not increased. The side tips of the rear wing, the hand plates, are also new: the new, larger design contains the impact of air on the wing and increases efficiency.

The new body kit of the Lamborghini Huracán Super Trofeo EVO has generated a considerable increase in the overall aerodynamic efficiency – 8% less resistance to forward motion – and this can be translated as a clear improvement in track performance. The new model was first tested on the Monza track and recorded a 1.5 seconds better time compared to the previous version: 1’46”3 compared to 1’47”8. The improvements made to the Lamborghini Huracán Super Trofeo are not limited to its aerodynamics but also include safety features: one of the main priorities for Lamborghini Squadra Corse during the development of its competition vehicles. As well as improvements in the vehicle’s driving stability, the roof hatch is also a new element. The hatch had already been introduced on the Lamborghini Huracan GT3 in order to comply with regulations and it has now been fitted on the Super Trofeo EVO in order to increase driver safety.

The new Lamborghini Huracán Super Trofeo EVO has a new exhaust system in response to the specifications of Lamborghini Squadra Corse. The system includes a new location for the catalytic converters, now between the terminals and the manifolds. This guarantees improved operating efficiency for team engineers and a general lowering of temperatures, thanks to the cooler and more efficient catalytic converters. The power steering pump has also been altered with higher levels of servo assistance resulting in better feedback for the drivers. Additional optimizations of the software complete the many modifications to the car. Like the previous model, the Huracán Super Trofeo EVO has an evolved naturally aspirated 5.2 V10 engine derived from the on-road Huracan with power increased up to 620 hp. It has a rear-wheel drive and X-Track six-gear sequential shift. The electronics include ABS by Bosch Motorsport and Traction Control by Motec, both with ten-position settings adjusted via controls on the steering wheel. The teams that have the current version of Huracán Super Trofeo, will have the opportunity to purchase the aerodynamic body kit to upgrade the car to new specifications.