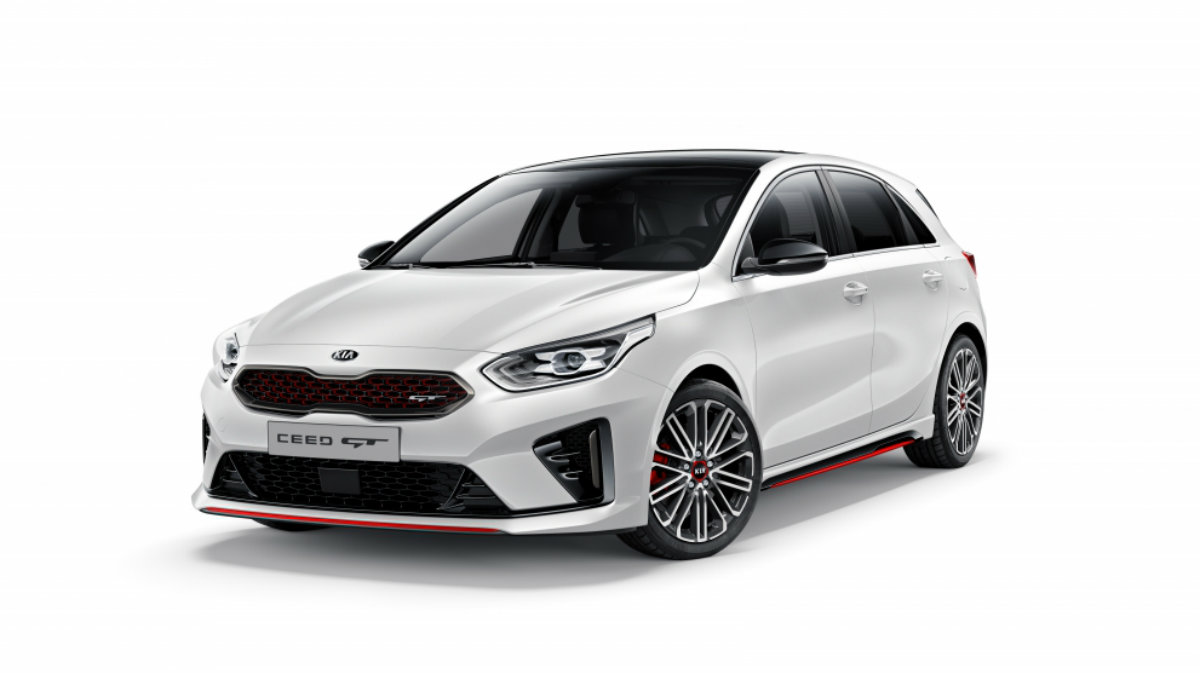 D, developed, engineered, and built in Europe. Powered by 1.6-litre T- engine that produces 204 ps and 265 Nm. Ceed GT available for the first time with a seven-speed double clutch transmission and six-speed manual transmission equipped as standard. Suspension and electronic driver aids adapted exclusively for model. The all-new Kia Ceed GT will be more accomplished and fun-to-drive than ever, and make its public debut at the 2018 Paris Motor Show in October, alongside the all-new ProCeed GT. The original cee’d GT and pro_cee’d GT were launched in 2013, representing the first ever performance hatchbacks from a Korean brand. The Ceed GT picks up where its predecessors left off, with an assured, engaging drive and a powerful 1.6-litre turbocharged engine, as well as a comprehensive range of comfort, safety and convenience technologies.

For the first time in a performance hatchback from Kia, the Ceed GT will be available with an optional seven-speed Dual-Clutch Transmission, in addition to the standard six-speed manual gearbox. Emilio Herrera, Chief Operating Officer for Kia Motors Europe, comments: “Our first GT models were important for Kia. They laid a blueprint for future performance cars from the brand, and proved there was a genuine appetite for faster and more engaging “drivers’ cars” from Kia. The cee’d GT and pro_cee’d GT provided the impetus for cars such as the Stinger and Optima GT, and introduced a sporty design appeal that has inspired a range of popular GT Line models across our product line-up.

“The all-new Ceed GT occupies a unique position in the mid-size family car segment and doesn’t simply chase the highest top speed or fastest straight-line acceleration. It offers greater agility and grip on winding roads, maximum confidence and comfort at a cruise, and fast-revving turbocharged power perfectly matched to European tastes.” Available exclusively to European drivers, sales will commence in the first quarter of 2019. The Ceed GT will be covered by Kia’s industry-leading 7-Year, 100,000-mile warranty as standard. Unique performance-inspired design with standard 18-inch wheels. The Ceed GT features a sporty exterior design to differentiate it visually from other models in the Ceed range. Where the design of the Ceed range is characterized by its blend of taut creases and curvaceous sheet metal, the GT variant presents a more athletic proposition than conventional versions of the car.

At the front, the Ceed GT has a new front bumper design, incorporating larger air intakes and gloss black trim along the base. Like the standard Ceed, the GT features a modern interpretation of Kia’s four-lamp ‘ice-cube’ LED daytime running lights, integrated into the main headlamp unit. Kia’s tiger-nose grille is also adapted for the new model, with a dark chrome surround and a subtle ‘GT’ logo. The honeycomb grille pattern is also embedded with subtle red highlights. In profile, it is finished with a glossy chrome window surround and features more substantial side sills, finished in gloss black and red. The standard 18-inch aluminum-alloy wheels feature a new castellated center cap finished in red, and house red brake calipers. At 135 mm, the ride height is reduced by 5 mm over other Ceed and Ceed Sportswagon variants, making it appear more planted on the road and reducing the overall center of gravity.

Unique GT bumpers at the rear complement those found at the front, housing a subtle gloss black rear diffuser, as well as ‘GT’, badging. A small roof spoiler helps channel air cleanly off the top of the car. The Ceed GT will be available across Europe in a choice of eight paint finishes, with its own unique 18-inch alloy wheel design. The Ceed GT features a series of changes to its cabin to separate it from non-GT models in the Ceed family line-up, with a sportier interior ambiance. The GT variant is built around the same ergonomic cabin architecture as other models in the Ceed line-up. Surfaces are finished in high-quality soft-touch materials and metallic trim, while the dashboard is angled towards the driver, making it easier to use on the move. At the center of the dashboard is Kia’s ‘floating’ touchscreen infotainment system – 7.0- or 8.0-inches wide – with audio and heating and ventilation controls situated below.

A black roofliner, enveloping and cocooning occupants, replaces the grey cloth found in standard Ceed models. Every GT model features a D-shaped steering wheel bearing the ‘GT’ logo, as well as aluminum driver pedals. Models equipped with Kia’s double-clutch transmission feature new metal alloy shift paddles behind the steering wheel. Front passengers in the Ceed GT are held in place by Kia’s new sports seats. Created exclusively for the model, these seats provide larger, firmer side and thigh bolsters compared to the original cee’d GT. Seats are trimmed in black leather and suede and finished with red stitching and a red-stitched ‘GT’ logo in the seat back.

For many drivers, a performance hatchback has to be able to fit seamlessly into their daily lives – for many owners, it may be the only car they have access to. Practicality is therefore essential – and the Ceed GT model is more practical than most, featuring the same large 395-liter boot as non-GT variants of the Ceed. Its low boot lip is 87 mm lower compared to the previous-generation model, making it easier to load and unload heavy or bulky items. A split-level boot floor allows owners to lower or raise the height of the boot floor, to accommodate larger cargo or create a hidden compartment beneath.

60:40 split-fold rear seats are fitted as standard, which folds down with a single touch from a lever just inside the tailgate. Accomplished, engaging and agile – European-developed ride and handling Home of the performance hatch, Europe is characterized by its diverse driving conditions: high-speed motorways, zigzagging alpine routes, congested city centers, and winding country lanes. The Kia Ceed GT has been developed to master all these environments. The Ceed GT has been engineered and developed exclusively for European roads and European drivers. At the direction of Albert Biermann, Head of Kia Vehicle Test and High-Performance Development, the car has undergone six months of additional testing, above and beyond the standard Ceed model line-up. The brief was to enhance cornering agility and yaw behavior, increase traction and responsiveness, and retain the ‘gran Turismo’ spirit of everyday usability that defines all Kia performance cars.

The GT model is fitted with the same fully-independent suspension hardware as the Ceed. However, the half-year of additional fine-tuning to the suspension geometry has rendered it more agile and more engaging to drive. The performance hatchback sits 5 mm lower than the standard Ceed and Ceed Sportswagon, reducing the center of gravity. Stiffer front and rear springs reduce body roll, improve responses to steering inputs, and give the car a firmer, more assured ride in all conditions – crucially, without rendering the car uncomfortable on longer drives or over broken surfaces. Furthermore, softer front and rear anti-roll bars ensure the inside tire remains in contact with the road under heavy cornering, enhancing traction and grip. These changes to the suspension enable GT drivers to enjoy faster cornering speeds than they might in a number of more powerful front-wheel drive ‘hot hatches’.

In addition, the standard Electronic Stability Control (ESC) system has been carefully retuned to offer keener drivers more freedom to exploit the increased agility and enhance the yaw rate of the rear axle. Kia’s Vehicle Stability Management (VSM) system is also standard, as well as Torque Vectoring by Braking. This additional electronic driver support feature intelligently brakes the inside wheels to reduce understeer around corners – making the Ceed GT more enjoyable and confidence-inspiring to drive on the type of winding lanes and mountain passes on which it has been developed. Consistent stopping power is provided by larger brakes, with the standard Ceed’s 288 mm ventilated front disc brakes replaced with 320 mm discs. The GT’s brakes are also 3 mm thicker, at 28 mm, aiding kinetic heat absorption and braking performance with repeated use.

The model offers greater potential for comfortable motorway cruising than many other more extreme hot hatches. Kia’s engineers have been careful to retain much of the comfort and unwavering high-speed stability that the standard Ceed and other Kia vehicles, such as the when at high speeds. The Ceed GT is fitted as standard with Michelin Pilot Sport 4 tires, enabling higher cornering velocity and traction. The car features electric motor-driven power steering, offering incisive responses to steering inputs with a fast 12.7:1 ratio and requiring only 2.44 turns lock-to-lock – 17 percent faster than the steering rack found in the original 2013 cee’d GT. When the first cee’d GT and pro_cee’d GT were revealed in 2013, they were powered by a newly-developed 1.6-litre T-GDi (Turbocharged Gasoline Direct injection) engine. Downsized, turbocharged and quick to respond to driver inputs across the rev range, the new engine came to define the car’s effortless approach to power delivery in all conditions. The Ceed GT retains this approach, with a 1.6-liter T-GDi engine that has been updated for the new model.

Producing 204 ps at a 6,000 rpm peak, the 1.6-litre T-GDi engine continues to provide effortless acceleration and easily-accessible torque. The engine’s maximum torque of 265 Nm is available across a wide 1,500-to-4,500 rpm rev range. The result is an engine which delivers as much of its performance as possible across all driving conditions. The Ceed GT is paired with a six-speed manual transmission as standard. In response to customer demand across Europe, Kia’s seven-speed Dual-Clutch Transmission is also available for the first time in the brand’s performance hatch. Developed in-house, the double-clutch transmission further broadens the appeal of the Ceed GT, enabling quick-fire automatic gear shifts, or letting drivers take over with metal alloy steering wheel paddles.

The Drive Mode Select system – available with the new seven-speed double-clutch transmission – enables owners to tailor their driving experience. Switching between Normal and mode, Drive Mode Select alters the level of effort required to steer the and subtly changes the character of the powertrain. Normal mode the potential for greater fuel efficiency and offers more relaxed steering inputs. mode enhances throttle and transmission responses, enables maximum acceleration – from a standstill and at speed – and adapts the steering to offer additional weight and more decisive responses to inputs. It also lets owners make the most of the GT’s 6,000 rpm peak power by holding on to gears longer under acceleration. The engine is paired with an electronic sound generator which delivers a characterful GT engine note into the cabin. A sportier exhaust note has also been realized with the adoption of new exhaust flaps, which enhance the sense of acceleration when the driver pushes the accelerator pedal, and ensure the car remains hushed and refined at steady speeds.

The Ceed GT provides owners and occupants with a wide range of technologies designed to make road travel as easy, comfortable and safe as possible. The standard ‘floating’ infotainment system is available as either a 7.0-inch touchscreen audio system or 8.0-inch touchscreen satellite navigation system, with navigation and Kia Connected Services powered by TomTom®. The system enables full smartphone integration with Apple CarPlay™ (for iPhone 5 and onwards) and Android Auto™ (for Android phones running 5.0 (Lollipop) or higher). Depending on specification, a powerful JBL® Premium sound system with Clari-Fi music restoration technology is available. Standard technologies include full Bluetooth® smartphone integration, automatic lights, and keyless entry. A heated windshield uses nearly-imperceptible wires to gently heat the glass, making the car easier to live within colder months by melting away frost, ice and windscreen mist at the push of a button. A wireless smartphone charger, heated front, and rear seats are also available.