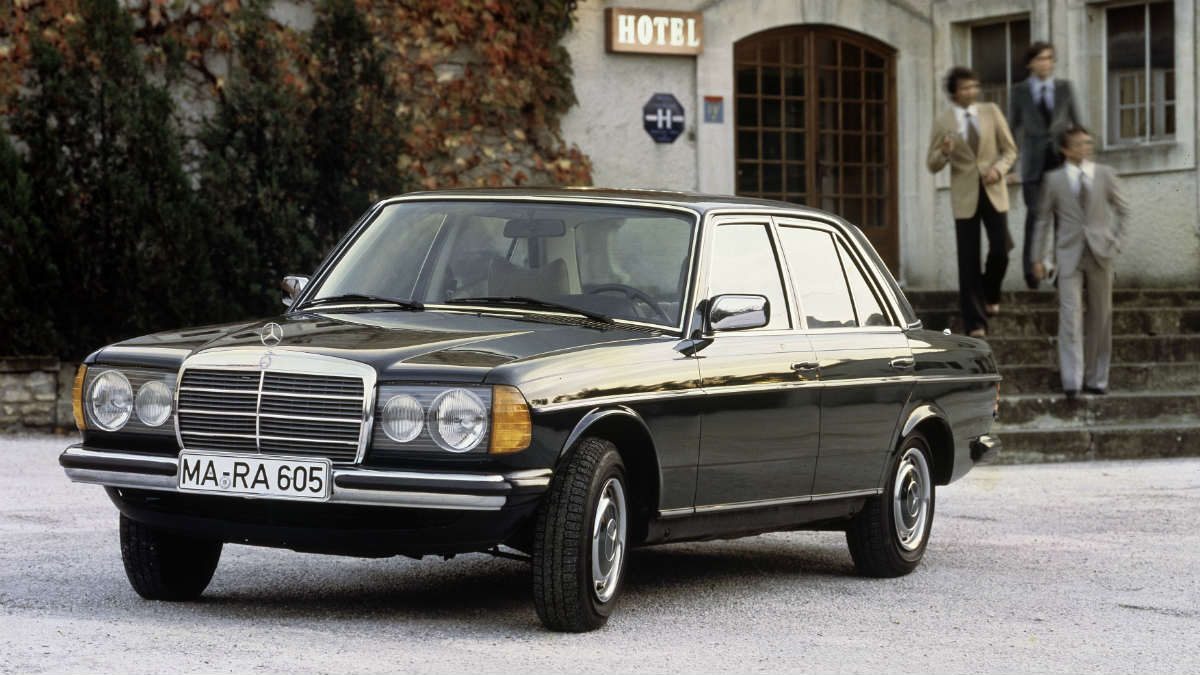 At its launch in January 1976, the Mercedes-Benz 123 model series offered a persuasive combination of elegance and multiple technical innovations. The saloon was the first model to become available. The range was expanded a year later by the Coupé and, for the first time, an Estate model. Over the course of the next ten years almost 2.7 million vehicles were built, among them also long-wheelbase saloons and chassis for special bodies. The era of the 123 model series marks a particularly successful chapter in the success story of the E-Class, as the intermediate model from Mercedes-Benz was called from 1993 onwards. The new E-Class of 2016 continues this success story.

The new intermediate-class saloon was presented by Mercedes-Benz to the specialist media between 22 and 28 January 1976 at the Paul Ricard Circuit in southern France. A train specially chartered for the purpose from the Deutsche Bundesbahn, the German Federal Railway, transported the fleet of test and demonstration vehicles from Stuttgart to France: no fewer than 33 variously appointed and equipped vehicles from the 123 series thus made their public debut to the motoring media under the Mediterranean sun. The response from the media was consistently positive – for the car‘s engineering as well as for its design. And their verdict was confirmed by the customers, too: the first year’s production sold out completely shortly after the launch of the W 123, with early second-hand models often selling for their original price within that first year of production.
The design of the 123 model series points to the future. In technical terms through its numerous innovations in the field of vehicle safety and in aesthetic terms through its styling, which took its cues from the then current 116-series S-Class and the R/C 107 SL models. Evidence of this is seen, for example, in the horizontally positioned headlamps in place of the vertically mounted lighting units that had previously been the convention. The W 123 was also impressive for its high standard of workmanship, functionality and wide range of engines. Even at the premiere in the south of France Mercedes-Benz was able to introduce nine different models, from the 200 D to the 280 E, with a broad spectrum of equipment and appointments.

Qualities for the future: safety and comfort

Maximum safety, exemplary comfort and ease of maintenance: such were the requirements made of the Mercedes-Benz design engineers in 1968 when the specifications book for the model series was drawn up. They were qualities that would go on to characterize every future generation of the E-Class. The design studies made for the W 123 included futuristic visions with sharp angles, massive rear roof overhangs, steeply raked rear windows and bulky rubber panels around the body. The most audacious of these sketches, however, remained safely in the drawer and by 1973 the classically elegant lines of the W 123 had largely been defined.

One of the priorities during the development of the 123 series was to improve safety for the car‘s occupants. The engineering designers were already, for instance, thinking about the integration of airbags, which then became an optional extra for the 123 model series from 1982 on. Passive safety was enhanced in particular by the combination of an even more robust passenger cell and large crumple zones. Stronger struts in the doors ensured better protection in the event of an impact. In addition, the safety steering shaft invented by Béla Barényi and patented in 1963 made its debut as a complete system in the W 123.

Among the technical solutions adopted by the W 123 from the S-Class was the double-wishbone front suspension with a zero scrub radius, while many of the engine variants offered when the model series was launched stemmed from the previous series, the W 114/W 115 (“Stroke/8”). New in the W 123 was the 2.5-litre six-cylinder M 123 engine in the 250 model (95 kW/129 hp). From 1978 on Mercedes-Benz would go on to undertake a thorough revision of the engine range in its intermediate class. New arrivals included the five-cylinder turbocharged OM 617 engine in the 300 D Turbodiesel of 1981 (92 kW/125 hp), which was only available in Germany as an Estate.
At its premiere in 1976 the 123 model series was offered as a Saloon, and then six months later in chassis form for superstructures added by external suppliers. However, as quickly as the following year, Mercedes-Benz went on to introduce the Coupé (C 123) and the Estate (S 123). The Estate model above all, whose German name “T-model” was derived from terms such as “Tourism” and “Transport”, introduced a focus on recreational activity and sporting lifestyle that would set the benchmark for the future of the E-Class: “This multi-purpose estate was a car to be enjoyed; one that would meet even the most exacting standards in terms of comfort and performance“, is how the German specialist magazine “Oldtimer Markt” recalled the birth of the Estate model in the 123 series in its issue 6/2008. 1977 then brought the premiere of a version of the Saloon with a wheelbase that had been extended by 63 centimeters (V 123).

Driving into the future

Mercedes-Benz began at a very early stage to investigate the use of alternative drive systems in the 123 model series. In 1983, for example, a 280 TE was fitted with a hydrogen drive system, following in the wake of a 1982 experimental vehicle with an electric drive system, also based on the Estate model. And as far back as 1981 Mercedes-Benz had presented a 200 model with a bi-fuel drive system (liquefied petroleum gas and petrol). There was thus already an indication of the importance that alternative drive systems would take on for future generations of the Mercedes-Benz intermediate model series, even four decades ago.
The 123-series Saloon was built until November 1985; the era of the no less successful 124 series had begun ten months earlier. Production of the especially successful Estate models in the 123 series even went on until January 1986. From 1975 until 1986 almost 2.7 million vehicles were manufactured, the highest proportion of these being Saloons with a normal-length wheelbase (2,375,440 units). 199,517 units of the Estate were built, along with 99,884 Coupé vehicles. In addition to these, there were 13,700 long-wheelbase Saloons and 8,373 chassis as a basis for special bodies. These days the 123 model series has long been recognized as a classic – and remains as fascinating as it was at its launch 40 years ago.